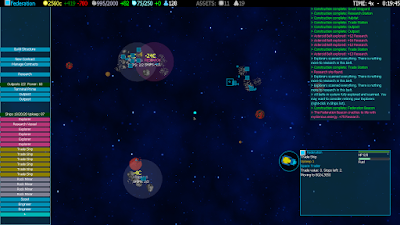 As usual, you can find the latest build on the itch.io page of the game... Or if you're using the itch app (you should because it's awesome) it should be updated automatically. Change notes after the break...
Post a Comment
Read more 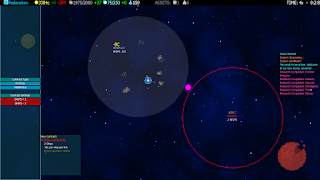 You can download the latest alpha from itch.io: https://reefpirate.itch.io/terminal-dominions Now that I'm using itch.io's butler to upload alpha builds I've reached a bit of a dilemma about version numbers. By old numbers this would be Alpha 116, but itch.io is keeping its own version numbers for each build I push. I'm tempted to use itch.io's numbers just to keep things more consistent, making this Alpha 3. Let's go with Alpha 3. Change log: - Added a few new sound effects for clicking around in the UI, and also for ship explosions, earning credits and launching missiles. - Cleaned up the Contracts system a little bit, both in presentation and in mechanics. The only user-adjusted variable on Contracts is now number of ships. Previously players could specify radius, rewards, and number of ships but I found it was really slowing down the whole process of posting contracts which is pretty central to the whole game loop.
Post a Comment
Read more

Get the latest version on itch.io: https://reefpirate.itch.io/terminal-dominions (side note about itch.io: I plan to figure out how their command line thing works) This ended up being more of a presentation update than I had planned. Several mechanics were tweaked behind the scenes, but I also do hope the look of the thing has improved somewhat. Alpha 112 Notes: General Pretty major changes to the Minerals economy considering the existence of a bug that caused depleted asteroids to spawn new asteroids. Minerals feel more scarce. I'm OK with this for now, but more tweaks to come for sure. Pirates! Well, one pirate... Pirates now feel more present on the map earlier in the game. Less carebear time, even on level one. Pirates have structures that camp and hold asteroid belts with their new Pirate Goons. Made some serious progress in straightening out the steering system in the game. Things fly smoother than ever. Still edge case problems, of course. Sligh
Post a Comment
Read more

March 30, 2017
New Alpha 108 can be found here:  https://reefpirate.itch.io/terminal-dominions Below is a brief summary of changes since Alpha 102. Moving forward I will try to keep my changelog a little more ready for public consumption. - Several minor tweaks and polish fixes - fixed bug where upkeep was not reset between levels - fixed some ALL CAPS content - Research points now more abundant and more accessible via Explorers and player now given free research at end of each level... New Research now costs more too - Research now can be gathered directly by explorers by exploring unexplored belts. They still do the scouting role for Research Vessels - FINALLY FIXED GODDAMN PARALAX SCROLLING... I THINK?! - fixed bug where Engineers doing repairs on structures would be flung off into space - fixed bug where PatrolNearXY command would terminate itself and then end up setting off queued actions ahead of schedule - added resource storage variables to player faction, also new research to increase h
Post a Comment
Read more
March 30, 2017 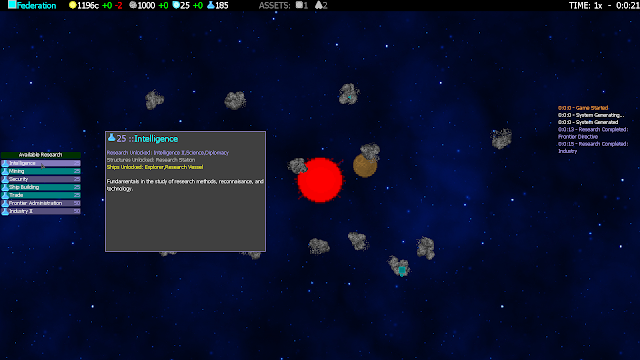 Some peeks at the new Research system, better resource UIs and layout in general, etc. Hoping to release an updated Alpha by this weekend. Three cores of research: Intelligence, Security and Industry. Unable to be seen here: New parallax effects on planets and stars. More work to come on that...
Post a Comment
Read more

What is all this?

This is a place where you can find Reefpirate's games and dev blogs. Please enjoy your stay.